Pictured: Ethan, accurately displaying how we all felt as day one of travel dragged on.

After two months in Chicago, we headed for the Buffalo National River in northern Arkansas. This trip had a lot of family ties as we were meeting my parents, my brother Jordan and his fiance Mai, plus I grew up vacationing here, and this was the first time I was returning as a mother and a wife. Oh, and it was the 4th of July and both my parents and J-Mai would be tent camping on our site and gleaning an up close and personal look at our life on the road. This trip to the Buffalo had the making of being a little epic, little did I know it was going to be full blown epic. 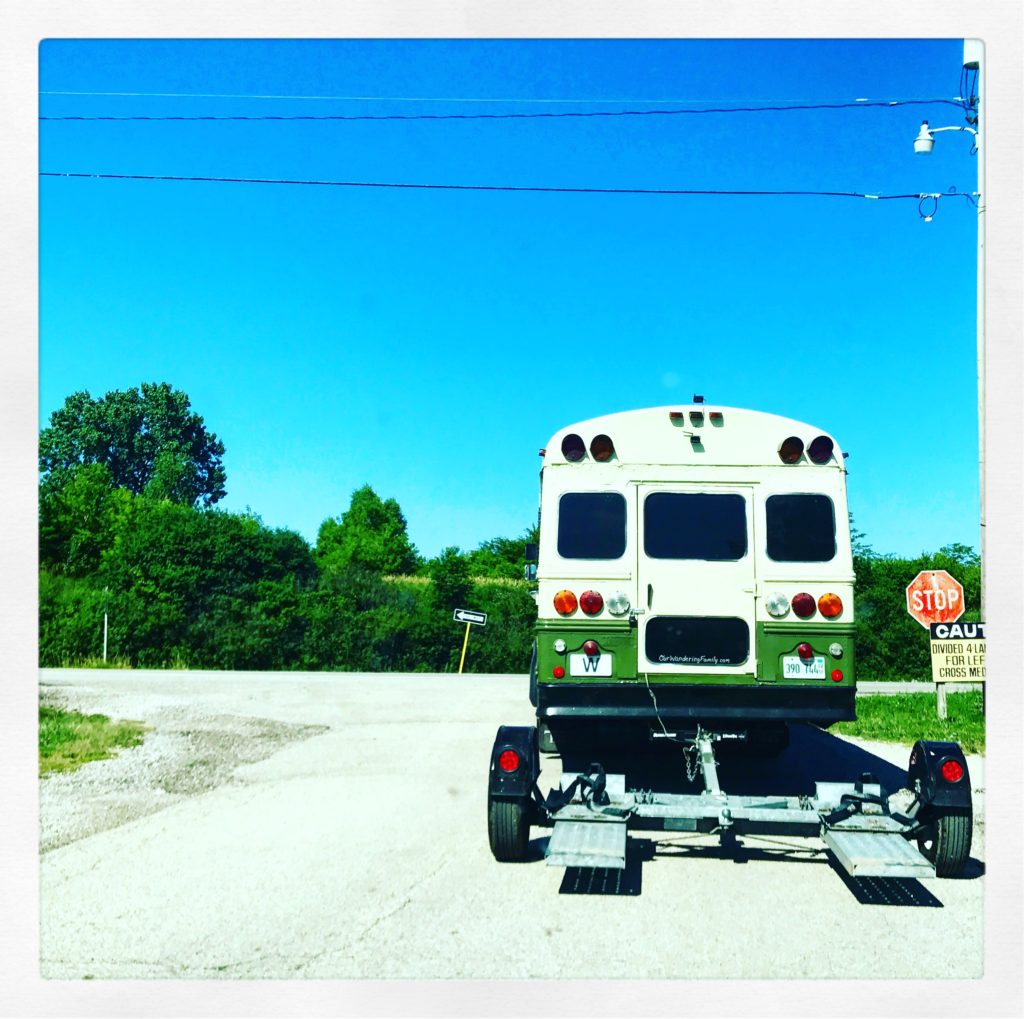 As we pulled out of Fish Lake Campground all five of us were excited for the trip ahead, but Jason and I harbored a little nugget of apprehension regarding the two-day drive to the Buffalo. See, we aren’t capable of booking a campsite ahead of time, and this drive had to be two days since it’s 600 miles from Chicago to Buffalo River. We don’t do 600 miles in Wander Bus in one day, it’s just not how we like to travel, so we needed a campground for Saturday night. On Fourth of July weekend. Yeah…

So, four days before we were scheduled to leave Chicago we began looking for a campground. I don’t know what we were thinking, but it wasn’t rooted in reality. After an exhaustive search, we found the last campsite anywhere near our route, but it required us to drive 450 of the 600 miles on our first day. That’s something we’d never done in Wander Bus and we had no idea how that would work out, but seeing as we aren’t set up to overnight it in a Wal-Mart parking lot, this last refuge campground was booked. 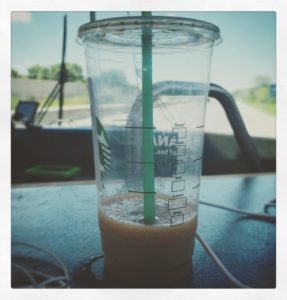 The drink of champions

As drives go, it really wasn’t that bad, until time started moving faster than Wander Bus, and we realized we’d be arriving at the campground in the dark, and that this campground was 50 miles from the highway. Did I mention it was dark? And that we were on country roads we probably shouldn’t have been on? In the dark? But, even with all these little hurdles, we try to roll with these things, because, really, what are you going to do? Turn around? And besides, we’ve done late arrivals before and a one lane country road won’t last forever, right? We were talking ourselves through this. So much positivity was flowing through Jason and I. 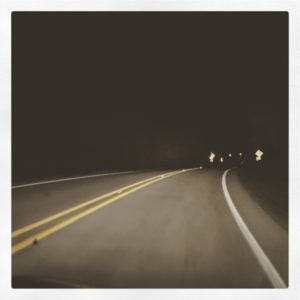 And then, with only 20 miles to go, a kid threw up from motion sickness. Cleaning up puke, in a bus, in the dark, while it’s still moving and children are tired and crying is this weird sort of torture that you wouldn’t wish on anyone, and yet, you wish anyone but you were in that Bus at that very moment. Kid puke is just gross. They have this wild abandonment to get as much as they can on everything around them. Add to it that our poor kiddo felt so bad, and kept wanting to help, and kept apologizing, and the whole thing was a hot mess, but we cleaned it up, and we pressed on. We’d deal with the clothes and the couch cushions tomorrow.

With exhaustion upon us all, we arrived well after 10 p.m. at Montauk State Park  and tucked in for the night. Thankfully we didn’t have a long drive the next day, so we didn’t feel the need to wake everyone early and get moving.

With morning freshness upon us, we loaded up and were ready to knock out those last 150 miles, but alas, we weren’t done with this National Lampoon trip. As we were going through the steps to pull the Van behind Bussie we discovered the trailer lights weren’t working and without brake lights or turn signals pulling the Van would be too dangerous. So, Jason spent an hour trying to rewire and figure out the problem, before calling it quits and taking the van off the trailer. With Jason and the kids in the Bus, I followed behind in the van and we headed to the nearest auto parts store to purchase wiring materials to get us back on the road.

This detour cost us over three hours and in the end, we weren’t able to fix the trailer without delaying us even more. It was well after 5 p.m. before we were backing Bussie into her campsite at Buffalo Point Campground. It was also around that time that I realized I’d left our step stool, the one we use to get into the Bus, in the parking lot of the Auto Zone. This was too much. Tears were shed. 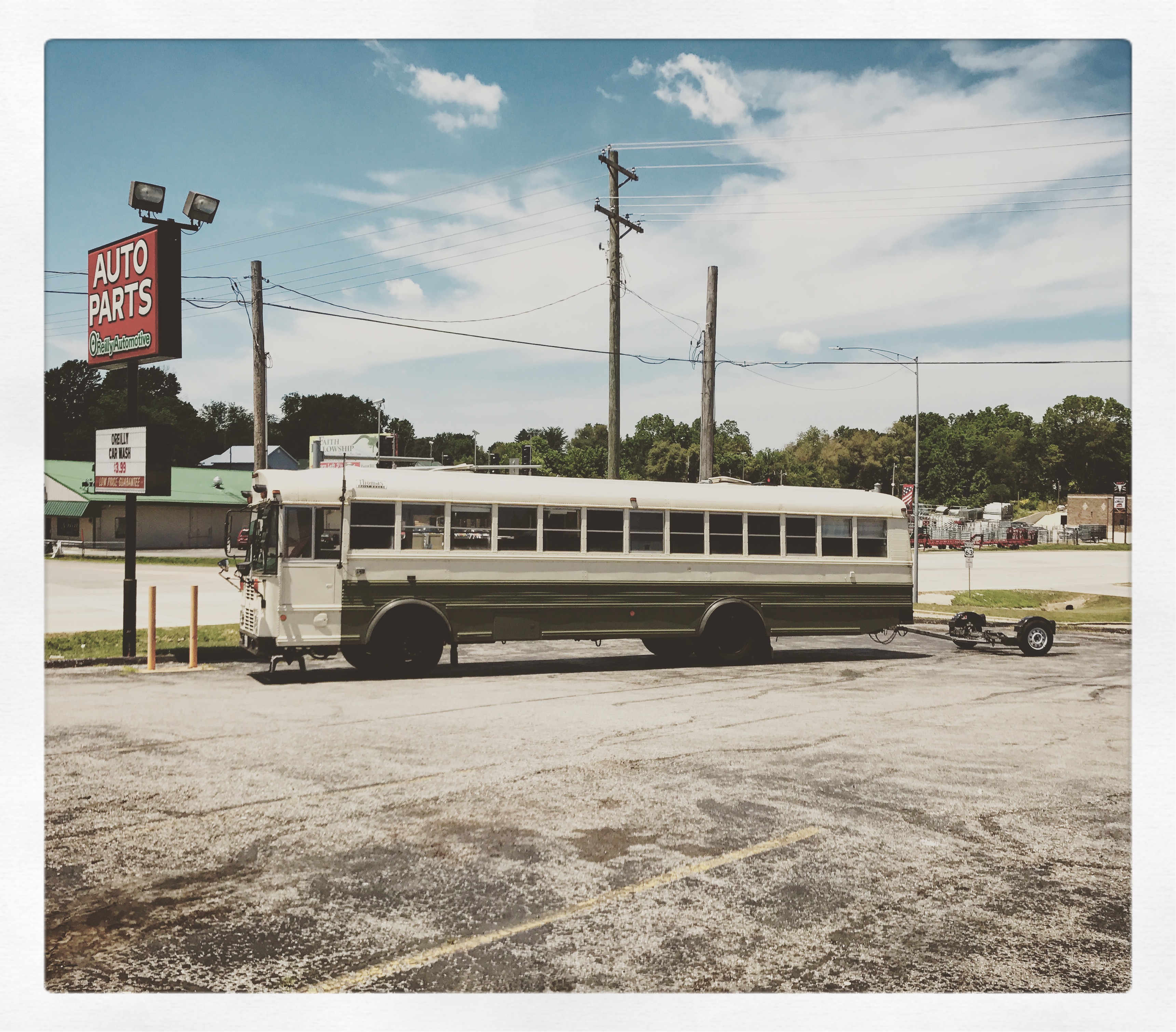 If you look closely, you can just make out our soon to be lost step stool under the front of Bussie.

It’s been a few weeks since this all went down, and I still can’t look back on it without shaking my head. Sometimes it’s hard to understand why life keeps knocking you over the head again and again. We’d been stagnant for two months in Chicago, and all we wanted to do was cruise on down the road and enjoy the views. Instead, we had puke, trailer troubles, a beloved step stool lost, and two very frustrating and long travel days, however, we were there. We’d made it. Family would be arriving the next day and we were pumped to get this party started, unfortunately, this “party” proved to have its own set of challenges. Challenges that would leave us completely washed out and water logged.

Waiting for the next installment! Marty