Have you ever been to Branson, MO? Growing up we’d always stop for a night or two in Branson on our way back home from a camping trip in the Buffalo National River. 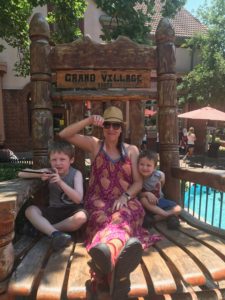 Big Rocker at The Grand Village

Branson is the complete opposite of camping at the Buffalo. I remember Madame Tussauds Wax Museum, Silver Dollar City, the recently closed Shephard of the Hills, the bright flashy lights of the main strip, the traffic, the campground under the bridge, which sadly, is no longer there, and the brochures in all the shops for just about every conceivable Country Western show you could imagine. Oh, and Yakov. Remember when Yakov Smirnoff played Branson for, like, 20 years?

In the last couple of decades, I’ve only been to Branson twice. Once a few years ago with the boys, and my dear friend Brooke and her boys. And this recent trip we made coming home from the July 4th Buffalo camping trip? Remember rainaggedon? Yeah, we haven’t forgotten either. In fact, we found water in a storage container two nights ago. A container we’d missed we when we were cleaning post-Buffalo/Branson. You can imagine how gross the stuff inside was.

We left the river and headed for Branson with my parents, who love Branson, my kids, who’ve already experienced some of Branson, and my husband, who’d never experienced any of Branson. I was all kinds of excited for this leg of the trip because we were taking our water logged selves out of Bussie for a few nights and into a hotel, the Radisson to be exact. Great price point, central to just about everything, and featuring one of the steepest parking lots I’ve ever seen. But, all of Branson is like that. Situated inside the Ozarks, the town is just one giant steep hill after another. Level is not a word you would use when driving, walking or parking in Branson.

Branson, for anyone who’s never been, is the love child of Nashville, TN and Las Vegas, NV raised by its grandma The Wisconsin Dells. It’s flashy and rooted in old school country music, and there’s mini golf on every corner. Also, Branson has the Titanic. Amazing, I know, but they do. I thought it was at the bottom of the ocean, but I guess they floated it up the White River… My parents keep trying to convince me Branson is changing as the generation who grew up on The Rolling Stones, Yes, Queen and anything from the late 60’s and 70’s rock genre retires, but if that’s true, the transition isn’t fully complete. There were a few rock tribute shows, but Dolly’s Dixie Stampede still reigns supreme and the Shoji Tabuchi show is still a family affair 29 years later. 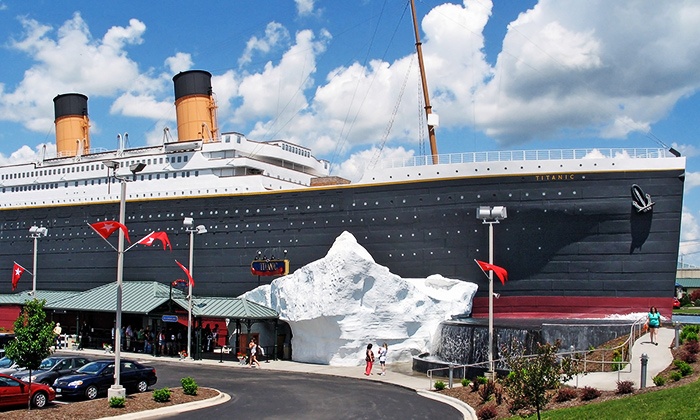 However, I will say this – There’s definitely change in the air and there’s a wider variety of options for visiting Branson than ever before. I’ll be curious to see how this long standing destination for country music variety shows evolves over the next decade.

Branson for us was a lot of food and shopping. So much food. A highlight was the amazing breakfast we had at Billy Gale’s Cafe. Known for their giant pancakes and some of the most decadent foods, we all feasted and then some. However, come early or be prepared to wait. We didn’t go early and we waited almost 45 minutes to get in, which, if you are taking kids to breakfast and you don’t feed them a pre-breakfast, means you are miserably waiting for 45 minutes. The complimentary coffee and toys in the waiting area helped, but at about the 30-minute marker I was wishing the coffee had more than just cream and sugar in it.

Once inside, the peaches and cream french toast, a seasonal special, made the 45-minute whine fest melt into oblivion, and Jason’s fried bologna with a side of everything else made him a happy man. 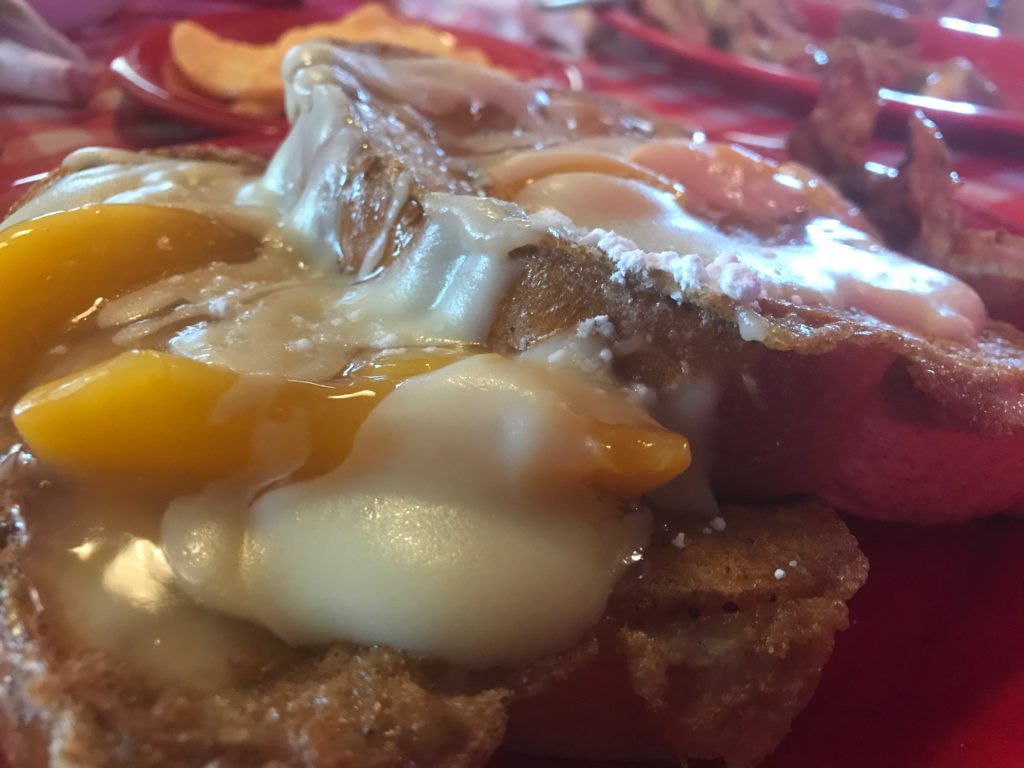 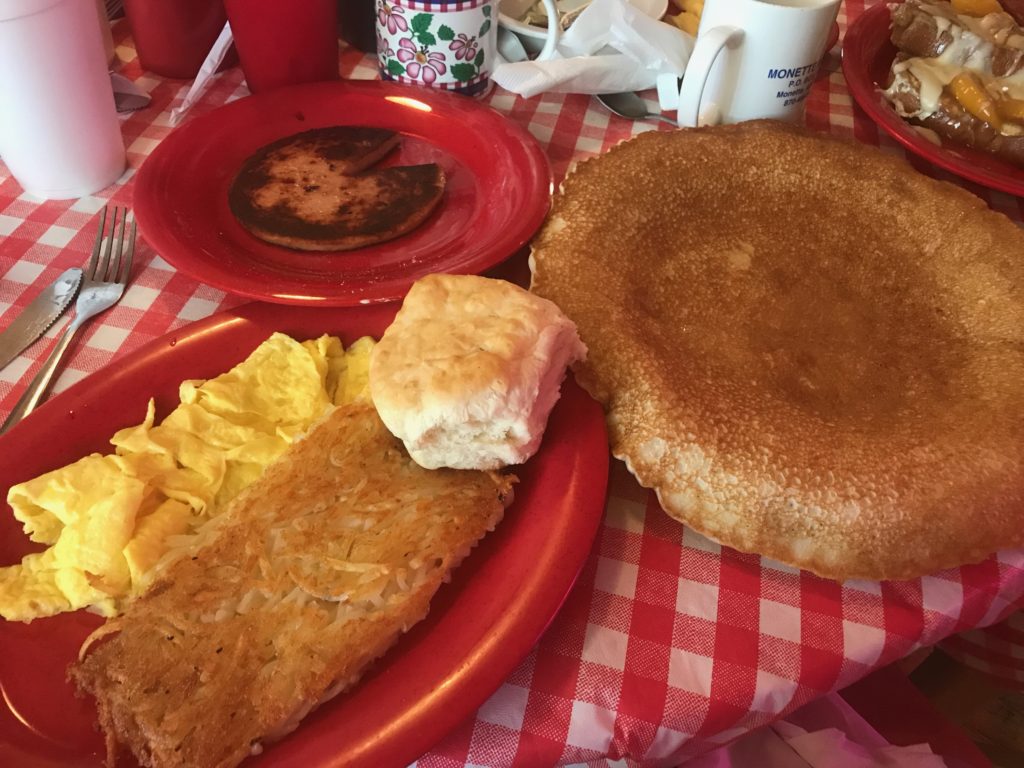 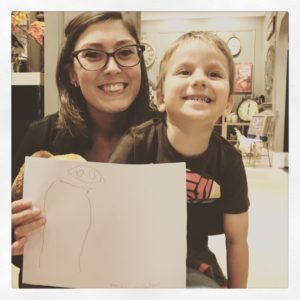 The Branson Landing is a cool new outdoor shopping plaza that you can easily pass an afternoon strolling through. We met a wonderful woman at Seasons @ Home named Joli and, Joli is awesome. Seeing that my kids were making it hard for me to buy all the things, she invited them to draw her a picture while I walked around in peace. Total mom move. She praised their work and took a real genuine interest in their creations, promising to hang them on her office wall. Henry loved the idea that his art would be hanging on someone’s wall. If you ever find yourself in Branson, go see Joli and tell her Our Wandering Family sent you. She’s the real deal and one of the kindest individuals we’ve met on the road so far. 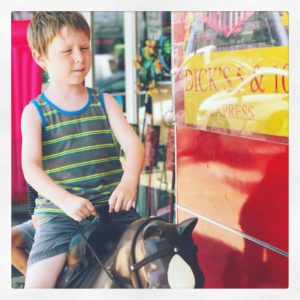 Outside of The Landing we meandered around Branson’s historic shopping district and stepped back in time at Dick’s 5 & 10. Dick’s has been a Branson staple for over 55 years and this store has the lock on nostalgia. Old school games, knick-knacks, books, toys, and all the candy your 8-year-old self could every desire. Grandparents and parents alike enjoyed picking up a few childhood favorites to share with the boys. I also picked up a Little House on the Prarie Guidebook, which I passed off as buying for the kids’ roadschool travels, but let’s be real, this book is for me and I will be the one orchestrating and loving every Laura Ingalls Wilder historical marker we come across.

Right about now, you may be asking yourself, “Abby, did you go to Silver Dollar City?” We did not go to Silver Dollar City and not because we wouldn’t have loved it, but after the physically exhausting few days of camping, the simple act of shopping, eating and swimming at the hotel was excitement enough. Plus, it was July and it was hot and humid and I’d had enough of feeling sweaty and gross. I know, that’s not a very outdoorsy attitude to take, but it is the truth. 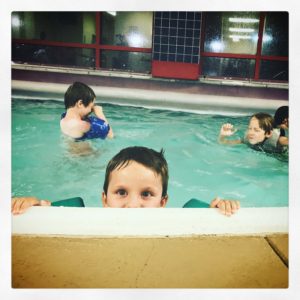 Branson was exactly what we needed and a great end to the week-long vacation we enjoyed with Mom and Dad. Don’t shy away from Branson if you find yourself in the Ozarks. Go and enjoy the kitch and take in a show, or shop, eat all the foods and have a great time enjoying all the family fun you and your loved ones can have.

From Branson, we made our way Kansas City to wander around for a few weeks, and finally earn those Harry S. Truman Junior Ranger badges we’d been talking about for far too long, and I had a twenty-year high school reunion. TWENTY YEARS. I think that deserves an all caps moment.

For now, friends, keeping wandering and make sure you save me a cherry Now and Later.

We are Jason, Abby, Jack, Ethan, and Henry and we travel full-time in our converted 2002 Thomas school bus. On the road since 2016, we document our adventures here, across social media and on our weekly podcast RV Miles. Join us as we explore our National Parks and discover all that a life on the road has to offer.

Joli you have them fooled alright! Keep it up! Lol

Love reading about your Branson adventure. Saw the episode of Tiny House-Big Living where they did the work on your Skoolie. Hope you make it back to Branson soon.