Photo: Jason on the beach at Fort Pickens.

From Ocean Springs, Mississippi, we made our way through Mobile, Alabama (wish we could have stopped and visited the U.S.S. Alabama) down into the final destination of our Gulf Coast tour, the eastern half of the Gulf Islands National Seashore, comprised of several sites in and around Pensacola, Florida.

Our host for 6 nights was the Fort Pickens Campground, which is way out towards the end of Santa Rosa Island, right by its namesake 1800s coastal fort. This area is simply amazing. The second you leave Pensacola Beach proper and enter the National Park Service grounds, it’s like the world changes. You drive 6 miles down a road with only white sands, ocean, and sparse trees on either side of you, peppered with random military gun batteries from different eras. It feels like you’re in an episode of “Lost,” where you’re on a deserted island but stumble on Dharma Initiative-style bunkers. Meanwhile, ghost crab cross the road and majestic ospreys fly overhead.

The campground itself is a very nice facility with good clean showers, dishwashing stations, and most importantly, easy beach access. This is a very popular campground, and we were lucky to snag a reservation by watching closely online, though we did have to move sites a few times. While thousands were likely hanging out on Pensacola’s beaches, there’s nary a soul to be seen on the pristine white sandbanks past the park gates. That is, unless you count the cute osprey hatchlings trying to catch a meal when the waves roll back. The water on the inland side of the island is a bit more still than the southern side, for those who care.

At the tip of the island is the actual Fort Pickens, an early 1800s gun battery that protected the mainland, just as coastal barrier islands protect the mainland from the full force of hurricanes. Interestingly, the only time Fort Pickens was ever fired upon was during the Civil War. The Union had control over the base, and won a massive gun battle over the Confederates at Fort Barrancas across the bay. Over time, the guns at Pickens became obsolete, and the military built new batteries all around the island that were never used, up through the 1940s. 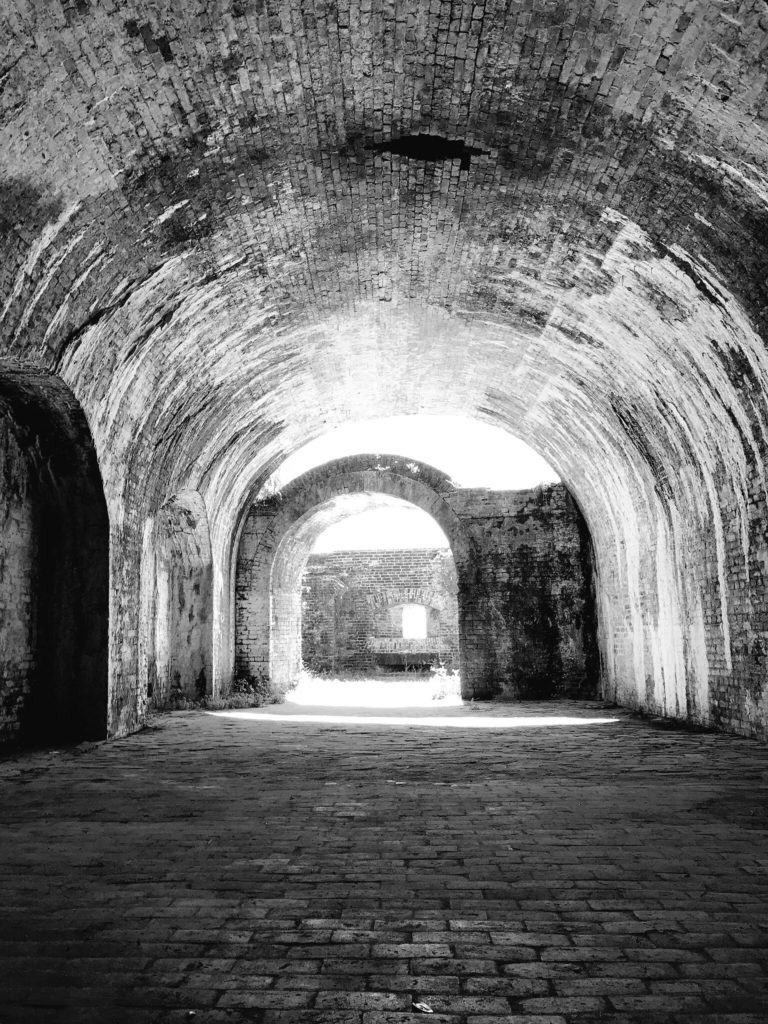 Inside Fort Pickens are hundreds of corridors just like this. 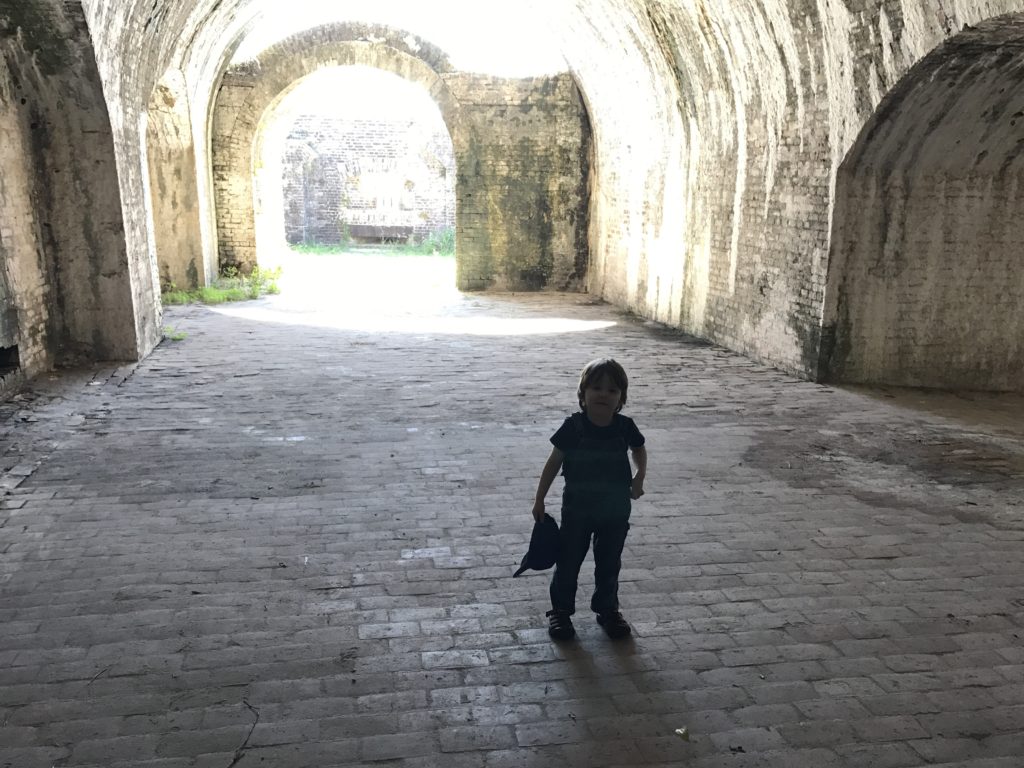 Henry taking his hat off for a moment to say “Hi” in Fort Pickens. 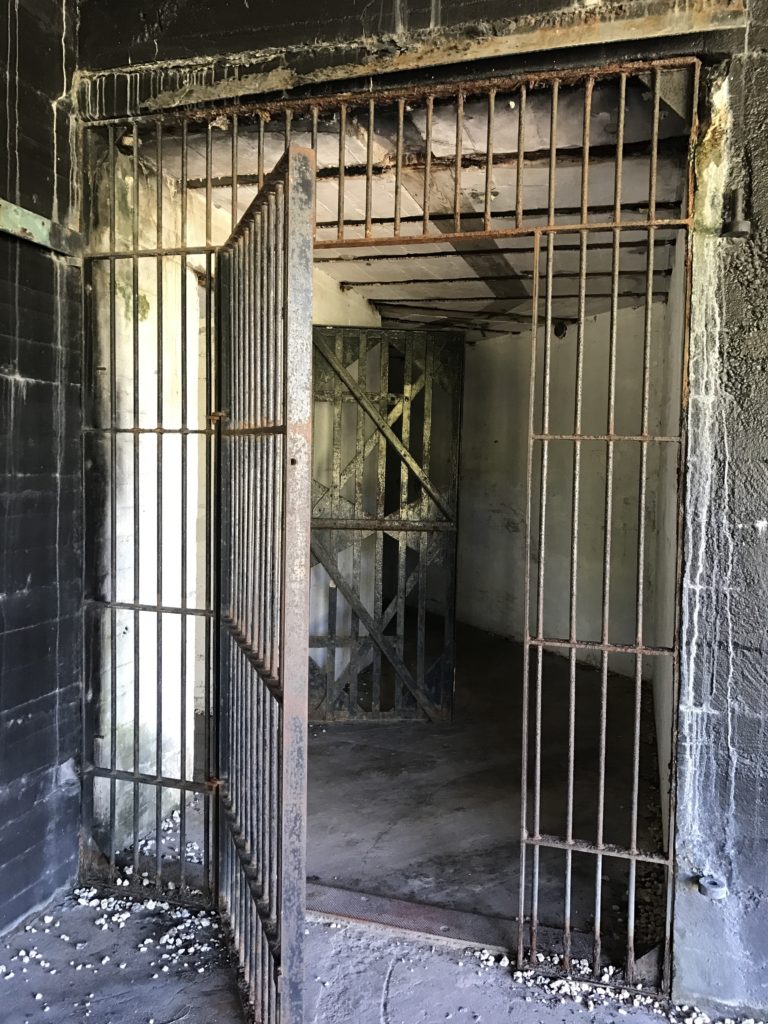 A barred door at Ft. Pickens.

A striking remider of why these forts are obsolete is on display often at Fort Pickens, as the Navy’s Blue Angels are based at Naval Air Station Pensacola across the bay. Multiple times a week you can see the most renowned fighter-jet stunt team in the world practice along the beach and right over the campground. On our second day, a French stunt team was practicing with the Angels, and a formation of 15 or so jets streaked right over the campground spewing red, white, and blue smoke, the colors of both our countries.

We took the time to visit the base, which houses the National Naval Aviation Museum. This is certainly the best free museum we’ve ever visited. Hundreds of retired flying machines from different eras are housed in two hangars. You can step into President Nixon and President Ford’s “Marine One” helicopter, sit in dozens of cockpits, watch an IMAX film, have lunch…it’s really a stellar museum. A destination in its own right. Also on the base are the Pensacola Light House which you can climb for a great view of the whole area, and the aforementioned Fort Barrancas, neither of which did we have time to visit. 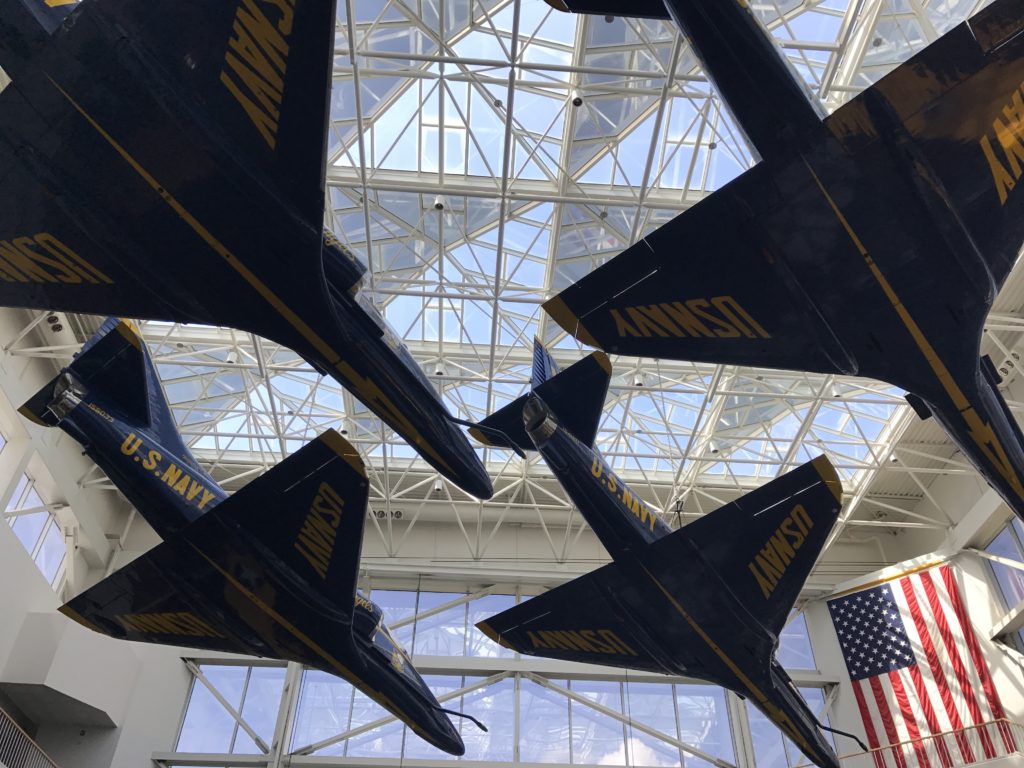 Actual size Blue Angel Hornets hang over you in the Naval Aviation Museum, along with hundreds of other jets up high and down low. 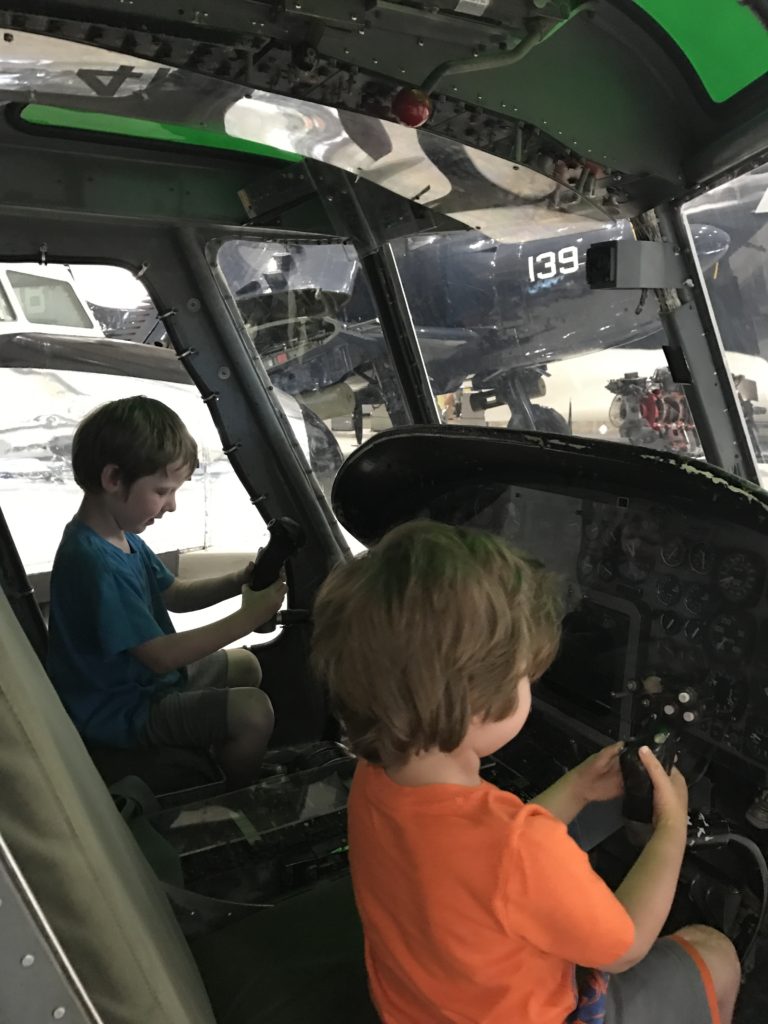 Ethan and Henry pilot a helicoptor, one of dozens of cockpits kids can climb in.

To the north of Pensacola, in Gulf Breeze, Florida, you can visit the Gulf Islands National Seashore headquarters at the “Naval Live Oaks” area, which is actually a pretty small visitor’s center in a wooded preserve with hiking trails and beach access. This is the first federally managed swath of land, where Live Oak trees were harvested for their unique bends and dense wood that made for great ship building for our early Navy. We had a nice lunch here, turned in our Junior Ranger program booklets, and moved on. It’s pretty, but staying on that island…it’s hard for anything to compare.

The Pensacola area has so much for anyone in the family. Beaches, wildlife, water sports, historic sites, and modern military muscle…especially for the veteran, it’s a must-visit, and the perfect culmination to our Gulf Coast adventure.